Are Legislators On Right Track With K-12 Reforms? 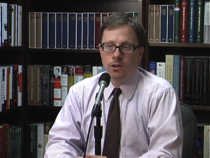 Negotiations are underway in Raleigh for a framework for reforming North Carolina’s public schools for the next two years. But are legislators on the right track? Terry Stoops, the John Locke Foundation’s director of research and education studies, discusses the reforms being discussed and offers his own recommendations for a sound reform plan, including opportunity scholarships. Meantime, these scholarships for low-income families are the source of one of the most hotly contested North Carolina political debates in recent weeks. The vouchers would allow those families who would like to send their kids to private schools to receive a voucher toward the cost. You’ll hear arguments for and against the scholarships from a recent N.C. House committee debate. Then we turn to economics. Bad government policies have helped contribute to the struggling American economy, but government leaders could change course by turning to “first principles” of economic freedom. Stanford University economist John Taylor made that argument during a recent speech at Duke University. That’s followed by a look at education innovation. Twenty years have passed since the first charter schools opened their doors. Minnesota charter school pioneer Ember Reichgott Junge, a Duke University law school graduate, documents the story of the nation’s first charter school law in the book Zero Chance of Passage. Junge discussed key themes from the book during a recent visit to North Carolina. And finally, we turn to energy news. An effort by a North Carolina legislator to pare back the state’s renewable energy mandate has stalled, and politics could be the reason. Carolina Journal Managing Editor Rick Henderson provides an update on how and why Rep. Mike Hager of Rutherford County is being thwarted by fellow Republicans.