Are There Too Few Women In N.C. Politics? 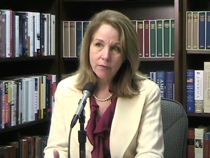 A new study of North Carolina women in politics shows that women hold less than one quarter of elective and appointed office, but they account for more than 54 percent of registered voters. Is the study’s author correct that the data represents a problem that must be addressed? Becki Gray, vice president for outreach for the John Locke Foundation, talks about the impact of women in the legislature, the many choices women make at different points in their lives, and the opportunities that await women interested in public service. Then we turn to two transportation debates. First, North Carolina lawmakers already have voted to require moped registration in the state. Some want to go further and require that all moped owners get insurance. You’ll hear highlights from a legislative debate on the idea.  Second, some N.C. legislators are pushing a bill that would limit regulation of a new vehicle called an autocycle. A combination of a car and motorcycle, the autocycle has not yet appeared on N.C. roadways. But advocates want to ensure that riders of the new autocycle would not be required to wear motorcycle helmets. That’s followed by a look at the history of North Carolina transportation policy and politics. More than 25 years ago, Republican Gov. James Martin and a General Assembly run by Democrats started North Carolina’s Highway Trust Fund. Joe Mavretic was speaker of the N.C. House of Representatives at the time. Mavretic recalls the Highway Trust Fund’s history and looks ahead at the future for high-dollar transportation projects in the state. And finally, Carolina Journal Managing Editor Rick Henderson looks at the debate over targeted tax incentives as a job recruitment strategy and why picking winners is a failed strategy. Henderson discusses the experience of Spirit Aero Systems, a manufacturing plant at the Global Transpark in Kinston, and the company’s failure to meet job creation targets despite millions in state incentives.