Are You In The Crosshairs Of The Nutrition Board? 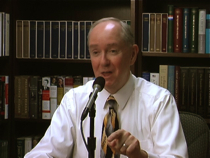 If you are giving advice to family or friends with a medical condition on what food is good for them to eat and what food is not, you could find yourself in trouble with the North Carolina Board of Nutrition/Dietetics. Carolina Journal Managing Editor Rick Henderson updates us on the legal case of diet blogger Steve Cooksey, who finds himself in the regulatory crosshairs of the board and who hopes his case will make its way to the U.S. Supreme Court. Henderson also explains what is occurring for a holistic health practitioner who is also facing scrutiny by the state board. Then we turn to fiscal matters. Lawmakers will craft the next state budget in the spring, but they’re already thinking about how the next budget plan will address public education. During a recent legislative meeting, state Superintendent of Public Instruction June Atkinson discussed how the State Board of Education is addressing proposals to institute performance pay for public school teachers. You’ll hear her comments, along with reaction from lawmakers. Fiscal matters are, of course, a key component of the state’s economic woes. John Locke Foundation President John Hood has set out an economic recovery plan for North Carolina in his latest book, Our Best Foot Forward. During a recent public presentation on the book, Hood discussed roadblocks standing in the way of economic reform. Those roadblocks include a perception among many of North Carolina’s entrenched leaders that nothing is wrong with their way they do business. State leaders have spent decades pointing to Research Triangle Park as an example of an economic success story for North Carolina. Now RTP is likely to undergo some substantial changes. Bob Geolas, president and CEO of the Research Triangle Foundation, details some of the ideas in the latest plan for RTP’s future. And finally, in North Carolina, well over one billion per year in state and federal dollars goes to private pre-schools, child care facilities, and institutions of higher education. Yet despite these private schooling choices funded with public money, there are relatively few options for kids in the middle – those attending K-12 public schools. John Locke Foundation Director of Research and Education Studies, Terry Stoops, discusses the disconnect in policy and the consistent opposition by the education establishment to embracing this option for K-12.