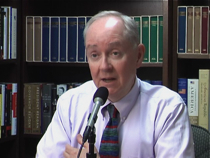 Three former associates of former Gov. Bev Perdue have been convicted of misdemeanor charges for obstruction of justice in an investigation of fundraising violations during Perdue’s 2008 campaign for governor. Carolina Journal Managing Editor Rick Henderson explains what happened in court, puts the convictions in context with convictions of several other Perdue associates, and talks about what appears to have motivated the activities that run afoul of campaign finance law. Then we turn to the psychology of voter behavior. If you’ve ever wondered why we end up with so many bad politicians and poorly designed public policies, blame ignorance. That’s the theory George Mason University law professor Ilya Somin explores in his forthcoming book, Democracy and Political Ignorance. During a recent visit to North Carolina, Somin explained why we devote more time and thought to choosing a car or a TV than to choosing a president. Next is a conversation with a man known as having been one of the most outspoken conservative members of the U.S. Senate – South Carolina’s Jim DeMint. DeMint is now the new president of Washington’s leading conservative think tank, The Heritage Foundation. During a recent visit to Raleigh, DeMint discussed his new job with John Locke Foundation President John Hood. That’s followed by a look at North Carolina’s business climate and general economy. Will the landscape look better to bulls or bears this year? It’s a question Triangle Business Journal editor Sougata Mukherjee and his staff will help answer as they cover business news in the weeks and months ahead. Mukherjee offers his perspective on the main issues influencing North Carolina’s business climate. And finally, we’ve heard the phrase “common core” referenced in discussion about education policy, but exactly what is it? John Locke Foundation Director of Research and Education Studies Terry Stoops explains what it is, how it is impacting North Carolina, and why parents and taxpayers should be concerned about is implementation.