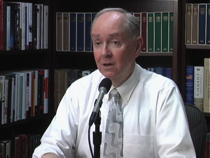 With the new year comes a new election season, and Carolina Journal has begun ramping up its coverage of the candidates and the issues. Carolina Journal Managing Editor Rick Henderson discusses the key races and explains why the eyes of national Democrats and Republicans are focuses on the Senate seat now held by Democrat Kay Hagan. Then we turn to efficiency in state government. A recent state audit raises a number of red flags about North Carolina’s Medicaid program, including the NC Tracks computerized claims system. You’ll hear highlights from State Auditor Beth Wood’s discussion of audit findings with state lawmakers. Next is our continuing coverage of the impact of the federal government takeover of the health insurance/health delivery system in the U.S. Now that it’s being implemented, the 2010 federal health care law – ObamaCare — is having an impact on insurance rates in North Carolina. Katherine Restrepo, the John Locke Foundation’s health and human services policy analyst, documented that impact during a recent public presentation. That’s followed by a look at an issue of serious concern to coastal North Carolina property owners. Concern is growing over a change in federal law that will raise coastal flood insurance rates dramatically. Chairman Tom Thompson and president Willow Kelly of the coastal group N.C. 20 shared their concerns recently with state lawmakers about the Biggert-Waters Flood Insurance Reform Act of 2012. And finally, many college students are recipients of Pell Grants from federal taxpayers. But the Pell Grant program is in serious need of reform. Jenna Ashley Robinson of the Pope Center for Higher Education Policy is an expert on the issue and she recently testified before a U.S. House of Representatives subcommittee about her concerns and recommendations for the costly program. She shares her ideas and the data on the ubiquitous college grant program.