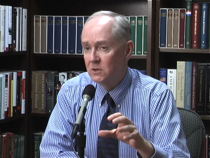 Investigative reporting by Carolina Journal has revealed that a tax fraud scheme may be operating in North Carolina. CJ Managing Editor Rick Henderson explains the tip Carolina Journal received from a Durham resident about letters from out-of-state tax agencies showing up in mail boxes, where they were then retrieved by people not from the neighborhood. Then we turn to the estate tax. Gov. Pat McCrory included repeal of the North Carolina estate tax in his first budget proposal. It’s an idea some state lawmakers are pushing as well. You’ll hear highlights from a recent N.C. House committee debate about the pros and cons of ending the tax often labeled the “death tax.” Next is a look at the relationship between government and the citizenry. When government officials violate the state’s open meetings and public records laws, they often face few consequences. Sen. Thom Goolsby, R-New Hanover, wants to change that situation. He’s filed a bill to turn violations of those open-government laws into misdemeanors. Carolina Journal Associate Editor Barry Smith caught up with Goolsby after the first hearing on his bill to get details. That’s followed by fascinating comments about the relationship between science and religion, which has intrigued political thinkers for centuries. Duke professor John Staddon recently contributed to the discussion by noting the limits of scientific facts and observations in helping us make decisions about the way the world works. And finally, John Locke Foundation Director of Regulatory Studies, Jon Sanders, discusses his recommendation that the state repeal the mandate passed in 2007 that forces utilities to produce a portion of their power from so-called “renewable” sources. Sanders explains how the mandates has resulted in higher electricity prices for ratepayers.