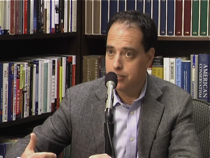 A state panel has recommended that each survivor of North Carolina’s eugenics program, under which more than 7,600 people were sterilized, be paid $50,000 each. John Locke Foundation Director of Legal and Regulatory Studies Daren Bakst offers his view of the plan, background on the eugenics program, and other recommendations to assist living victims. Next is a look at the tug-of-war between the federal government and the states. The U.S. Constitution is the supreme law of the land, trumping all state laws and state constitutions. Does that mean the federal government always has the power to tell state governments what to do? Wake Forest University political science professor John Dinan explores the ways state governments are talking back to Washington, D.C. Then we turn to state budget issues. When a government agency has to tighten its belt, you might think one easy target would be unfilled job positions. But before his recent resignation as head of the N.C. Department of Health and Human Services, Secretary Lanier Cansler explained to state lawmakers why his department was able to cut just 130 of the 1,600 vacant jobs on its rolls. That’s followed by a look at an 80-year-old debate between two economists in England, which continues to have profound effects on American politics today. That’s the idea journalist and author Nicholas Wapshott puts forward in his recent book Keynes-Hayek. You’ll hear highlights from Wapshott’s recent presentation on the book at Duke University. &nbsp;And finally, JLF Director of Fiscal Policy Studies Fergus Hodgson analyzes North Carolina’s $2.7 billion unemployment insurance debt. The state owes the federal government the money for loans used to pay unemployment benefits during the recession. Hodgson offers recommendations to reform the unemployment insurance system so that the deficit doesn’t occur again.