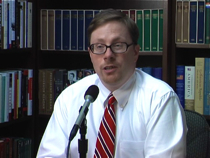 North Carolina’s education establishment isn’t happy about a legislative reform that will end the practice of giving teachers a big raise for obtaining a master’s degree. Supporters say the more credentials the better, while the research says something very different. Terry Stoops, John Locke Foundation director of research and education studies, reviews the data that supporters of paying teachers for the degree ignore. He also discusses the path toward compensating teachers for their value. Then we turn to the nexus of politics and election law. U.S. Attorney General Eric Holder and N.C. Gov. Pat McCrory have sharply contrasting views of the potential impact of North Carolina’s new election law. You’ll hear Holder explain the basis for his federal suit against the law, along with McCrory’s defense of the election changes. Next, we look at presidential history that has a serious lesson for today’s financial crisis. Politicians who worry that government “austerity” will cost them votes ought to consider the success story of America’s 30th president. Calvin Coolidge biographer Amity Shlaes explained during a recent series of Triangle lectures how Coolidge was able to succeed with a plan of scaling back a bloated federal government. That’s followed by a conversation with the new leaders of the N.C. FreeEnterprise Foundation, which is keeping a close watch on the impact of state legislative action upon North Carolina’s business environment. Executive director Joe Stewart and research director Matt Bales explain the foundation’s purpose and discuss the ways in which it is sharing its assessments with business leaders and the public. And finally, we look at the dubious policy of providing refundable tax credits to the film and TV industry. John Locke Foundation director of regulatory policy studies, Jon Sanders, explains why North Carolina is engaged in a losing game by providing the credits to attract Hollywood to the state. Since the credits are refundable, Sanders explains, the state ends up writing checks to producers. He offers recommendations for attracting the industry to the state while protecting taxpayers.