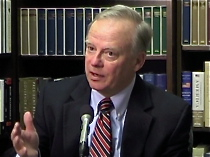 Bob Orr, founding executive director of the North Carolina Institute for Constitutional Law, has announced he’s leaving the public interest law firm after seven years at the helm. Orr discusses the organization’s legal victories and losses as it seeks to defend and protect the state constitution. Then we turn to questions about how to make government more efficient. North Carolina taxpayers could get more bang for their bucks if state agencies’ budgets were tied more closely to the agencies’ basic goals. That’s the assessment of State Auditor Beth Wood. She recently recommended a process to state lawmakers that would boost the importance of government performance measures in the budgeting process. Next is concern about use of taxpayer dollars related to a $17 million rail spur at the Global TransPark. No one plans to use the spur. Spirit Aerosystems lobbied for the spur during the incentive negotiations that brought that company to the TransPark, but Spirit has no plans to use the spur. Sen. Debbie Clary, R-Cleveland, Rep. Edgar Starnes, R-Catawba, and Rep. David Lewis, R-Harnett, raised concerns about the spur during a recent legislative debate. That’s followed by a look at politics and campaign promises. Republicans running in 2010 legislative elections promised to pursue more business-friendly policies than their Democratic counterparts. After winning those elections, the GOP has had a year to put its policies in place. John Rustin, executive director of the N.C. Free Enterprise Foundation, discusses his group’s recent ratings of the General Assembly’s business policies. And finally, John Locke Foundation Director of Research and Local Government Studies Michael Sanera discusses a new report that details work by some North Carolina counties to privatize some services. Sanera also discusses areas of privatization some counties say they tried, but to poor results.