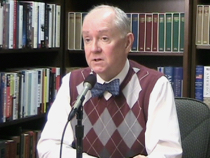 For three years, Carolina Journal has followed the free speech plight of Stanly County resident Steve Cooksey. He’s been engaged in a legal battle with the N.C. Board of Dietetics and Nutrition, which told him he needed a government license to offer online advice about the diet he likes. Carolina Journal Managing Editor Rick Henderson updates us on Cooksey’s recent victory against the overreaching regulatory board and discusses the implications for others. Then we turn to controversy over North Carolina education policy. Lawsuits challenging North Carolina’s Opportunity Scholarship Program recently headed to the N.C. Supreme Court. During oral arguments in the case, Institute for Justice senior attorney Dick Komer defended the scholarships, answering a series of pointed questions from Supreme Court Associate Justice Robin Hudson. You’ll hear highlights from their exchange. Then attorneys Burton Craige and Noah Huffstetler offered contrasting arguments about the constitutionality of opportunity scholarships, also known as school vouchers. You’ll hear their competing statements for and against this tool to give more educational choices to low-income families. That’s followed by a look at efforts to reform federal fiscal policy. More than 20 years after its founding by a bipartisan group including two U.S. senators, the Concord Coalition continues to push for responsible federal fiscal policy. Sara Imhof, the coalition’s director of education and grass-roots advocacy, discussed the group’s goals during a recent visit to North Carolina. And finally, we look at a new report from a business group that claims to show a strong economic return on investment in transportation projects. John Locke Foundation Vice President for Research Roy Cordato explains why the report is flawed on its conclusions about the economic impact of such actions.