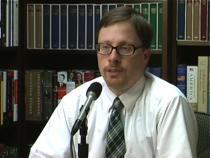 Disagreements earlier this year over how much money to spend on public education led critics of the Republican-led General Assembly to claim thousands of teachers would lose their jobs due to budget reduction. John Locke Foundation Director of Research and Education Studies, Terry Stoops, discusses new data from the state Department of Public Instruction that firmly refutes those outrageous claims made by the Left. Then we turn to news from state Revenue Secretary David Hoyle, who says North Carolina already has seen some benefits from his department’s new Tax Information Management System. But Hoyle recently warned lawmakers that they should expect some glitches next summer when the Revenue Department finishes converting from its old computer system to TIMS. You’ll hear highlights from Hoyle’s briefing on the new system and the way it will help state tax collectors do their jobs. Next is a look at the impact of state regulation on the health care industry. Critics of North Carolina’s certificate-of-need law for state medical facilities and equipment can look at the Harnett County town of Erwin for a good case study. Harnett County commissioner Jim Burgin recently explained to state lawmakers how the CON law has blocked efforts to replace Erwin’s Good Hope Hospital. Anyone who has followed the federal health care debate closely knows about the “individual mandate,” the requirement that every person purchase health insurance or pay a penalty. University of Louisville economist Stephan Gohmann recently reminded a Campbell University audience that governments also pursue other types of health care mandates. Gohmann outlines the problems associated with those mandates. And finally, we take a look at North Carolina history. When historians focus on African-American history, it is usually in reference to the hideous discrimination and legal restrictions that were imposed on blacks during and after slavery. Troy Kickler, director of the North Carolina History Project, explains that there are also many inspiring stories of success by free blacks who were able to achieve despite the many obstacles of their time. Kickler details the odyssey of several of these tenacious men.