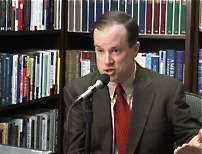 The Nov. 3rd election brought very interesting results across North Carolina. In Greensboro, a political novice ousts the incumbent mayor, in Charlotte, Democrats win the mayoral race and a solid majority on the city council, and two counties give a thumbs-up to a 1/4 cent sales tax hike, while another county does the opposite. John Locke Foundation president John Hood assesses the results on the changing political fortunes in some municipalities, and the strength of incumbents in others. Then we turn to education. Seven charter schools are suing the state and some county governments (Mecklenburg, Union, Rutherford, Cleveland, Nash, Edgecombe, and Halifax) over the system used to fund charter schools in North Carolina. The schools call existing funding restrictions unconstitutional. Jason Kay, senior staff attorney with the N.C. Institute for Constitutional Law, explains why. Next, a surprising statement from a powerful state bureaucrat. The executive administrator for the State Health Plan believes he holds too much power. That’s what Jack Walker told a panel of state lawmakers this summer. Walker oversees the plan that serves 665,000 state workers, retirees, and dependents. Walker says the executive administrator can make unilateral decisions on such important issues as changing rates for dependent coverage. He urged lawmakers to consider changes that would rein in his authority. That’s followed by a look at the growth of government. Fans of limited, constitutional government work constantly to warn people about the dangers of a growing government with higher taxes and more regulations. Americans for Prosperity North Carolina recently highlighted its concerns with a presentation from Steve Lonegan, a former mayor and New Jersey gubernatorial candidate. You’ll hear highlights from Lonegan’s presentation in Raleigh. And finally, low-cost energy is key to our current and future prosperity. Why, then, are so many states adopting energy policy that will raise the cost of energy? Daren Bakst, the Locke Foundation’s legal and regulatory policy analyst, offers his perspective on these damaging decisions.