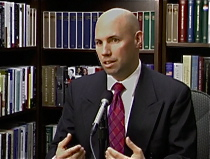 If the agreement goes through as presented by President Obama and congressional Republicans, a number of economic initiatives will take effect in January, including the extension of the existing income tax rates and unemployment benefits for 13 additional months. John Locke Foundation Director of Health and Fiscal Policy Studies Joe Coletti assesses the plan and whether or not it is likely to kick-start the economy, create private-sector jobs, and provide needed certainty to the business community. Next, new state Revenue Secretary David Hoyle says his department will need a new law from the General Assembly in order to send $2.3 million in tax refunds to 7,000 taxpayers. Hoyle recently explained why during a presentation to his former legislative colleagues. You’ll hear Hoyle’s comments, along with reaction from Sen. Dan Clodfelter, D-Mecklenburg. Then we turn to the issue of gubernatorial power. While Republicans have won control of the North Carolina General Assembly, Democratic Gov. Beverly Perdue still has some power to set state government policy. But John Locke Foundation President John Hood recently explained to a Charlotte audience that Perdue’s powers are weaker than some governors in other states, thanks largely to decisions Democratic legislators made years ago. That’s followed by a look at the state of gun rights. Despite some recent court victories, Americans’ Second Amendment gun rights remain under attack. Former Georgia congressman and 2008 Libertarian Party presidential candidate Bob Barr is speaking out about the threats to Americans’ right to bear arms. Barr, a National Rifle Associate board member, shares his concerns. And finally, John Locke Foundation Director of Education Studies Terry Stoops discusses a recent call by some state education officials to use the ACT to assess all North Carolina high-schoolers. Stoops explains what has been proposed, the costs involved, why there is hesitation to implement the test, and the difference between the ACT and the SAT tests.