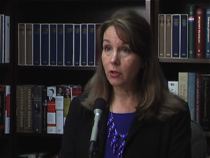 When U.S. Attorney General Eric Holder announced the federal lawsuit against North Carolina’s election reform law, he accused the state of intentionally seeking to limit the number of minorities to vote. But the John Locke Foundation’s Vice President for Outreach, Becki Gray, says Holder’s words and lawsuit are based in politics rather than the law. Gray explains why the law’s provisions are on sound legal ground and why they bring North Carolina into the mainstream of election law. Then we turn to political history. Today’s politicians could learn plenty of valuable lessons from a president who served in office more than 80 years ago. That’s the opinion of Amity Shlaes, director of the 4 Percent Growth Project at the George W. Bush Center. Shlaes’ latest New York Times best-seller tells the life story of former President Calvin Coolidge. She shares highlights from her research into Coolidge’s legacy. Next is a look at a state program that’s raising questions about whether or not it’s needed. The N.C. Commerce Department hopes to save money and improve service by combining several existing state government jobs programs into the new N.C. Works Online. You’ll hear highlights from a recent presentation on the program, including concerns from at least one lawmaker that N.C. Works competes needlessly with the private sector.

Richard McKenzie, professor emeritus of economics at the University of California at Irvine, grew up in a North Carolina orphanage. McKenzie has spent much of his time recently correcting false impressions about orphanages. In the recent book, “Miracle Mountain,” he tells the story of the 100-year-old Crossnore School in Avery County. And finally, Jon Ham, publisher of Carolina Journal, analyzes mainstream media coverage of the rollout of ObamaCare and the partial federal government shutdown. Ham says there is little to celebrate about the state of journalism today.