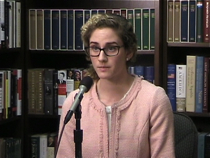 What is the best way to reform and improve North Carolina’s trouble health insurance program for the poor and disabled? That is the question being considered by legislators and Gov. Pat McCrory. Any reform effort should following several guiding principles, says Katherine Restrepo, the John Locke Foundation’s health and human services policy analyst. She explains why the current model of fee-for-service payment to providers fails to encourage better quality, more efficient delivery of care. As the discussion over what course to take continues, a recent poll suggests N.C. Republican officials could pay a political price if they decide to expand the state’s Medicaid program. Christie Herrera, senior fellow at the Florida-based Foundation for Government Accountability, discusses the poll’s details. Next is a look at energy policy. The N.C. Department of Transportation is making plans for hydraulic fracturing operations that could start in North Carolina as soon as next year. During a recent legislative hearing, lawmakers urged N.C. DOT not to take steps that would overburden the energy industry. You’ll hear highlights from the discussion. That’s followed by a look at the state of political discourse. Democrats and Republicans are likely to disagree on many major issues in the years ahead, but that doesn’t mean they have to be disagreeable. Rep. Rick Glazier, D-Cumberland, recently touted the benefits of civility in politics during a presentation for a John Locke Foundation audience. And finally, Jenna Ashley Robinson of the Pope Center for Higher Education Policy looks at the market forces at work in higher education, and the options and accountability that flow from those forces. Robison laments that the same forces aren’t at work in the monopolistic K-12 public school system.