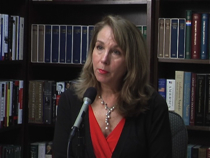 It’s a done deal. After months of discussions, debate, and negotiations, the state’s new General Fund operating budget for the year that began July 1 has been signed into law by Gov. Pat McCrory. John Locke Foundation Vice President for Outreach, Becki Gray, shares her view of the spending and taxing plan and explains why it is a budget that looks out for taxpayers despite a small increase in spending. Then we turn to issues of taxation. Recent polling shows North Carolinians oppose federal legislation that would increase taxation on Internet-based sales. Representatives of the National Taxpayers Union and R Street Institute joined Sen. Thom Goolsby, R-New Hanover, recently to discuss the poll results and explain why they are watching congressional action on the topic. Next is a look at a key change in Gov. Pat McCrory’s administration. State budget director Art Pope announced plans to step down from that post next month. Gov. McCrory praised Pope’s work during a recent news conference and introduced his successor as budget director: banking executive Lee Roberts. That’s followed by a look at possible changes in media law. Federal regulators are considering policies that could lead to major changes in the way media companies operate in the future. Mark Prak, one of the state’s leading media attorneys, discusses some major substantive changes under consideration from the Federal Communications Commission. And finally, we continue delving into the new state General Fund operating budget with a focus on the K-12 education piece of the plan. John Locke Foundation Director of Research and Education Studies, Terry Stoops, provides details on teacher raises, reform to the teacher salary schedule, and funding for teacher assistants.