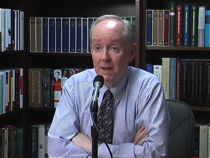 North Carolina’s incoming governor, Pat McCrory, has made key appointments to head state agencies that will be front and center in the new year. Carolina Journal Managing Editor Rick Henderson profiles three of the key players – Chief of Staff Thomas Stith, Health and Human Services Secretary Dr. Aldona Vos, and Department of Environment and Natural Resources Secretary John Skvarla. Next is a look at national politics. The federal government starts the new year with many of the same cast of characters in charge of the White House, federal agencies, and Congress. Fred Barnes, Fox News analyst and Weekly Standard executive editor, discusses the implications of the 2012 elections for Washington politics and state-level politics in 2013. Then we turn to health care. UNC Health Care’s chief executive officer, William Roper, is a Republican appointed to top-level national health care posts by Ronald Reagan and both presidents named George Bush. But Roper’s recent presentation to state lawmakers on the future of American health care challenged what he labeled as “myths” supported by both Republicans and Democrats. You’ll hear highlights from that presentation. That’s followed by a debate likely to continue into in the new session of the General Assembly – the proper funding level for N.C. Pre-K, the program that replaced More At Four as North Carolina’s academic program for at-risk 4-year-olds. You’ll hear highlights from a recent legislative debate over the best way to fund that program. And finally, Troy Kickler of the North Carolina History Project discusses key points every American should know about a key foundational document, the Federalist Papers. Kickler explains why the documents were written, by whom, and the impact the Federalist Papers had on the founding of the country.