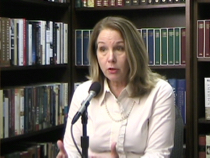 Helping North Carolinians understand why it’s important to embrace freedom and free enterprise is at the core of the John Locke Foundation’s educational mission. As we enter an election year, that mission is being focused on helping candidates of all political and ideological stripes learn more about the many policy choices they will face if elected. John Locke Foundation Vice President for Outreach Becki Gray discusses her workshop series that begins in January and continues throughout election season. Gray explains what she’ll talk about with candidates as she seeks to help them see choices through the lens of freedom. Then we turn to U.S. politics. Twenty years have passed since Jack Kemp last made national headlines as the Republicans’ vice presidential candidate. But Kemp’s political legacy lives on. Fred Barnes, executive editor of The Weekly Standard and political commentator for Fox News, explores Kemp’s continuing impact on American politics in a new biography. He shares details with Carolina Journal Radio. Next is a look at controversy in higher education. What could have been a pleasant celebration of Tom Ross’ last meeting as University of North Carolina president turned instead into a protest of the UNC Board of Governors’ decision to hire former U.S. Education Secretary Margaret Spellings as Ross’ replacement. You’ll hear the protests and reaction from BOG members. That’s followed by a look at a national issue making waves in North Carolina politics. Both Gov. Pat McCrory and his most likely 2016 general election opponent, Attorney General Roy Cooper, have endorsed the idea of a pause in resettlement of Syrian refugees in North Carolina. It’s also an issue that has attracted attention from state lawmakers. You’ll hear highlights from the General Assembly’s recent debate over Syrian refugees. And finally, Jon Guze, the John Locke Foundation’s director of legal studies, looks at the legal case involving the North Carolina State Bar and online legal documents firm Legal Zoom. The case has been settled and centered around Legal Zoom’s right to operate.