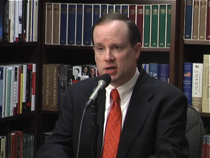 Gov. Pat McCrory has been in office for nearly two months and has begun to lay out his priorities. John Locke Foundation President John Hood analyzes the governor’s vision for government efficiency, transportation, and more. Then we turn to tax reform. As North Carolina lawmakers prepare to undertake a redo of the system, they’re hearing ideas from a number of outside groups. Douglas Lindholm, president and executive director of the Council on State Taxation, offered his thoughts during a recent business gathering. COST represents some of the nation’s largest businesses. Next is a look at lawmakers’ reforms of North Carolina’s unemployment insurance reforms as the state tries to repay $2.5 billion in debt owed to the federal government for unemployment benefits. You’ll hear arguments for and against the reform from the state Senate debate on the issue. That’s followed by a look at energy policy. The process of hydraulic fracturing – or fracking – for natural gas has generated quite a few headlines in North Carolina in recent years. Algenon Cash, chairman and small business ambassador for the N.C. Energy Forum, explains why his group is sharing information about fracking and other topics tied to homegrown energy resources. And finally, Carolina Journal Managing Editor Rick Henderson updates the unusual circumstances surrounding the awarding of the Order of the Long Leaf Pine award to former state Sen. R.C. Soles, who then cancelled the awards ceremony.