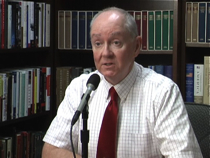 The legislature is back in Raleigh and no person is getting more scrutiny than House Speaker Thom Tillis, Republican of Mecklenburg County. Political watchers of all stripes are eyeing Tillis as he juggles dual roles as leader of the N.C. House and GOP nominee for the U.S. Senate seat now held by Democrat Kay Hagan. Carolina Journal Managing Editor Rick Henderson assesses Tillis’ challenge and the dynamics of the federal race that increasingly looks like it will focus on state-level policies and issues. Then we turn debate over a particular tax. Lawmakers have haggled over a plan to scrap North Carolina local governments’ privilege license tax and replace it with a new local business tax of no more than $100 per business per city. You’ll hear highlights from a recent N.C. House debate on the topic. Next is a look at the intersection of policy and politics. The return of state legislators to Raleigh in May led to the renewal of the so-called “Moral Monday” protest movement. But protesters were greeted with a message promoting the benefits of recent reforms from the Republican-led General Assembly. Carolina Rising President Dallas Woodhouse explains why North Carolinians should be happy about recent changes in state law. That’s followed by an in-depth look at the actions of the U.S. Supreme Court, which is supposed to uphold the provisions of the U.S. Constitution. In the book Terms of Engagement, Institute for Justice senior attorney Clark Neily explains why the high court has fallen short of that duty. And finally, state lawmakers are scrutinizing spending as they prepare the General Fund operating budget for the fiscal year that begins July 1. Jenna Ashley Robinson of the Pope Center for Higher Education Policy says a good place to look for places to rein in spending is the UNC System’s budget. She explains how much money is appropriated to the system and offers recommendations in areas such as faculty time spent in the classroom and the continual growth of special institutes.