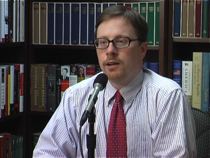 Over the last several years, North Carolina has made progress in giving parents more choices about where to send their kids to school. The arbitrary cap on public charter schools has been lifted, for example. But there is much more reform work to do, says John Locke Foundation Director of Research and Education Studies. Stoops discusses tax credits and education savings accounts, as well as changes to testing and accountability standards – all ideas that are featured in the new JLF book, First in Freedom. Then we turn to politics and conservatism. Democrat Barack Obama’s re-election as president has prompted Republicans and conservatives to ask what they’ll need to do to regain the White House in the future. One conservative who’s offering answers is Louisiana Gov. Bobby Jindal, who recently addressed a GOP gathering in Charlotte. Jindal shares his ideas for helping conservatives regain momentum on the national level. Those wondering why Washington, D.C., seems so gridlocked should consider the impact of the changing political parties. That’s the assessment from Grover Norquist, president of Americans for Tax Reform and a recent panelist for an event tied to N.C. State University’s Institute for Emerging Issues. Norquist says more ideologically divided parties are bound to have a harder time reaching compromise on tough political issues. That’s followed by a look at how North Carolina goes about raising revenue, which is on the mind of state legislators as they purse an overhaul of the state’s complex tax code. Legislative staffer Cindy Avrette recently updated legislative tax writers on some of the basics of North Carolina’s current system of raising revenue. And finally, if you have a skill or trade you’d like to practice to earn a living in North Carolina, you might be surprised to learn how difficult it can be to pursue your economic future. John Locke Foundation Director of Regulatory Studies, Jon Sanders, discusses North Carolina’s heavy reliance on licensing of occupations, policies that hinder new entrants into these many fields. Sanders explains what’s really afoot with the policies and makes recommendations to allow more people to use their talents and support themselves.