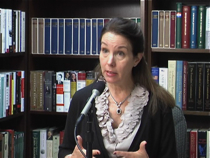 In the waning days of her administration, Gov. Beverly Perdue has angered Republicans with her actions related to a rushed plan to lease the Dorthea Dix hospital property to the City of Raleigh and her end-run around her own executive order to appoint a replacement for retiring North Carolina Supreme Court Justice Patricia Timmons-Goodson. John Locke Foundation Vice President for Outreach, Becki Gray, explains the deals and the basis for negative reaction from legislative leaders, particularly state Sen. Leader Phil Berger of Rockingham County. Then we turn to plans to address a serious debt problem in North Carolina. State lawmakers are considering a mix of tax increases and benefit cuts to help North Carolina pay off its $2.4 billion debt to the federal government for unemployment benefits. You’ll hear recent public reaction to their plan from state business leaders and unemployed workers. Next is a closer look at the lame duck governor. During her final weeks in office, Gov. Beverly Perdue pushed through the N.C. Council of State a plan to lease the Dorothea Dix property to Raleigh for a new city park. You’ll hear Perdue and Attorney General Roy Cooper tout the plan, while Auditor Beth Wood explains her decision to abstain from voting on the deal, and Labor Commissioner Cherie Berry discusses her “no” vote. That’s followed by a discussion of what ails us as a society. Charles Murray of the American Enterprise Institute describes in his latest book, Coming Apart: The State of White America 1960-2010, the forces that have separated the nation’s new upper class from the rest of society over the past five decades. Murray explains the problems associated with an America that seems to be coming apart at the seams. And finally, Carolina Journal Managing Editor Rick Henderson provides details of former First Lady Mary Easley’s legal settlement with NC State University over her 2009 dismissal from a high-paying job coordinating a lecture series. Easley is walking away with a hefty pension increase.