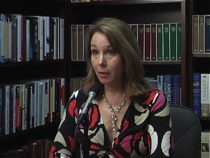 Soon the North Carolina House of Representatives will choose a leader for the chamber as Thom Tillis heads to Washington to take his seat in the U.S. Senate. John Locke Foundation Vice President for Outreach Becki Gray explains the role of the Speaker, the impact he/she can have, and the dynamics of a new person in the small circle of powerful leaders. Then we turn to what’s ahead for Tillis. North Carolina voters replaced Democratic U.S. Sen. Kay Hagan after a single term with Republican with the House Speaker. Shortly after the election, Tillis shared his ideas about the reasons for his election win and his priorities as he prepares for a new job on Capitol Hill. Next is a look at the justice system. North Carolina is reviving its dormant state Courts Commission. During the group’s first meeting in years, Rep. Sarah Stevens, R-Surry, discussed the reasons why she and other supporters believe the commission can play an important role in addressing the needs of the third branch of state government. That’s followed by a look at the midterm election results. Pundits and prognosticators are still making sense of the 2014 elections. Bill Kristol, editor of the Weekly Standard, offered his analysis during a recent speech to a John Locke Foundation audience in Raleigh. Kristol also offered insights about the election and its ramifications for the next two years during a one-on-one interview with Carolina Journal Radio. And finally, we look at our state’s school choice gains and at new threats specifically to the growth of public charter schools, which now educate 67,000 Tar Heel students. John Locke Foundation Director of Research and Education Studies Terry Stoops explains the roadblocks the movement is facing from entrenched status quo interests.