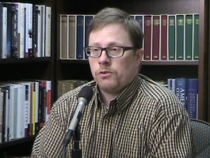 It is called the Leandro case, and for more than two decades it has had a major impact on education policy and law in North Carolina. Last week, Wake County Superior Court Judge Howard Manning , who oversees the case, held yet another hearing. Terry Stoops, the John Locke Foundation’s director of research and education studies, was in the courtroom. He explains the judge’s message and concern of lack of student achievement and what could come next in the decades-old saga. Then we turn to a different issue related to the courts. North Carolina is one of just two states that automatically send misdemeanor offenses involving 16- and 17-year-olds to adult courts, rather than the juvenile system. A bipartisan group within the N.C. House wants to change that system. The group held a recent news conference explaining why reform makes sense. Next is a look at a man who has inspired many. While the John Locke Foundation celebrates its 25th anniversary, its E.A. Morris Fellowship for Emerging Leaders celebrates its 10th anniversary. During a recent speech to E.A. Morris Fellows, JLF founder and recent N.C. state budget director Art Pope recalled lessons he learned from Morris, a textile entrepreneur, about setting budget priorities. That’s followed by a look at a piece of North Carolina’s cultural history. Longtime residents of Southport can revisit the community’s past through the artwork of Art Newton. Southport resident and former state Transportation Secretary Tommy Harrelson documents Newton’s work in a recent book. Harrelson explains why Newton deserves special recognition for his artistic contributions. And finally, we look at tax refund fraud exposed by a North Carolina tax preparer and reported by Carolina Journal. The story comes as millions of North Carolina taxpayers met the April 15 deadline to file their returns. Carolina Journal Managing Editor Rick Henderson explains the scheme in which taxpayers claim as dependents children who don’t live with them or who don’t even exist.