Legislative Mini Sessions Under the Microscope 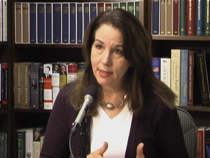 The Republican leadership in the General Assembly is taking heat from Democrats and some pundits for the decision to hold several mini legislative sessions since leaving Raleigh in July. John Locke Foundation Vice President for Outreach Becki Gray explains what’s been accomplished in the sessions and why they’ve been held. Then we turn to an ongoing debate between the legislature and state agencies. When lawmakers expect state agencies to consult with the General Assembly before moving forward with big-ticket spending items, there’s some disagreement about what that consultation means. You’ll hear legislative debate on the consultation surrounding an $11 million project at the Global TransPark in Kinston. Next we turn to talk of sales taxes. North Carolina’s sales-tax rate fell in July when the Republican-led General Assembly pushed for a temporary sales tax to disappear. Still, state sales-tax collections in the current budget year have grown. Legislative economist Barry Boardman and Sen. Jerry Tillman, R-Randolph, recently discussed the implications of the relationship between tax rates and tax revenues. That’s followed by a fascinating look at history. Moore County resident Vern Pike was the first U.S. Army officer in charge of the famous “Checkpoint Charlie” on the right the Berlin Wall went up during the height of the Cold War. He’s written a book on his experiences, and he shares anecdotes from that key episode in Cold War history. And finally, as the new year dawns, a new executive director takes over the North Carolina Institute for Constitutional Law. Jeanette Doran, who has been senior staff attorney for several years, explains the issues likely to take her attention in 2012 and talks specifically about incentives such as those used to entice film production companies to the state.