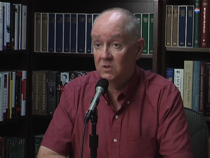 Anti-Republican protesters became a fixture at the General Assembly during the recent legislative session in Raleigh, with the N.C. NAACP leading other progressives and Democrats in the movement they dubbed ‘moral’ Mondays. Carolina Journal Managing Editor Rick Henderson discusses the activities of the protesters, the changing composition of the group, and the summertime activities focused on turning out voters to elect Democrats. Then we turn to policies on North Carolina campuses. Some state lawmakers want to protect political and religious groups on community college and university campuses from the threat of a “hostile takeover.” They’re pursuing legislation that would guarantee that these groups can select their own leaders, without fear of running afoul of university restrictions. You’ll hear highlights from a recent debate on the issue. Next is a look at two key issues with a legendary attorney. Benjamin Ginsberg has been a lawyer for the Republican National Committee and for the presidential campaigns of George W. Bush and Mitt Romney. During a recent visit to Raleigh, he discussed with Carolina Journal Radio recent election law developments and President Obama’s legal strategy. That’s followed by an interview with one of the people helping to develop policies to improve North Carolina public school safety. Luke Stancil is a rising senior at a Johnston County high school. He discusses his work with the governor’s Safe Schools Task Force. And finally, we delve into the histrionic claims made by North Carolina progressives and Democrats against conservatives and Republicans. John Locke Foundation President John Hood explains the folly of the claims and uses an interesting analogy about a feuding family’s disagreements over what to eat for dinner, and how to get to the selected restaurant, to illustrate his point about why the progressive approach is so unhelpful.