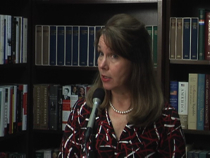 The General Assembly has officially adjourned, but the work is far from over. In fact, 20 study committees have been authorized to look at an array of issues, including several that are key to fiscal conservatives. John Locke Foundation director of outreach, Becki Gray, talks about why it is important for legislators to delve into property rights, market-based solutions for health care, the education Common Core, and more. Then we turn to the intersection of policy and politics. The grass-roots free-market group Americans for Prosperity is taking aim at U.S. Sen. Kay Hagan, D-N.C., because of her continuing support for the federal health care reform law known as Obamacare. AFP president Tim Phillips explains why his group launched a $1.6 million television ad campaign to remind North Carolinians of Hagan’s votes to maintain the unpopular law. Then we turn to working relationships among state agencies. Gov. Pat McCrory wants leaders of state transportation, environment, and commerce agencies to work together on long-range plans. Commerce Secretary Sharon Decker explained during a recent briefing for regional transportation officials why she’s happy to have a seat at the table when transportation decisions are under discussion. That’s followed by a critical look at higher education. The general education requirements at North Carolina’s flagship public university fail to make the grade. That’s a conclusion from a new report from the Pope Center for Higher Education Policy. Report co-author Jenna Ashley Robinson, Pope Center director of outreach, discusses the report’s key findings and recommendations for improvements at UNC-Chapel Hill. And finally, state lawmakers could make a good first step at lowering health care costs if they would repeal the state law known as certificate of need. John Locke Foundation Director of Regulatory Studies, Jon Sanders, discusses the negative impact the CON law has had on the state and why other states long ago rid the books of it.