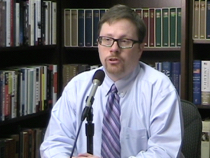 K-12 education comprises nearly 38 percent of the state’s General Fund operating budget, and it gets lots of legislative attention. But in addition to the funding issue, state legislators will make consequential decisions about other education issues as well. John Locke Foundation Director of Research and Education Studies Terry Stoops discusses the likely legislative agenda for the new session, including performance-based compensation and more scholarship opportunities. Then we turn to transportation. As North Carolina officials make long-term transportation plans, one option they’re considering is increased use of toll roads. Michael Lowrey, an economics and regulatory policy analyst for the John Locke Foundation based in Charlotte, questions whether the state has planned adequately for toll road projects. Lowrey shares his concerns about chasing toll revenue before determining whether tolls make sense for a particular road. Next is a look at energy policy. State lawmakers recently heard a briefing about the proposed Atlantic coast natural gas pipeline. Sen. Buck Newton, R-Wilson, peppered a Dominion Power representative with questions about the how the pipeline would benefit people in eastern N.C. counties. That’s followed by a look at an education controversy. The N.C. Department of Public Instruction hopes to defuse a controversy about a revised Advanced Placement U.S. history class by renaming another course that deals with civics, economics, and the nation’s founding principles. Lawmakers recently heard a briefing on the change from state school Superintendent June Atkinson. You’ll hear her remarks, along with concerns from Kim Fink of the Coastal Carolina Taxpayers Association. And finally, we look at the misguided push to send most high-schoolers on to a traditional four-year college. George Leef, director of research for the Pope Center for Higher Education Policy, explains that alternative paths can reap great rewards but are a threat to the education establishment. He specifically discusses the case of Peter Thiel, whose effort to steer bright students out of college and into entrepreneurial apprenticeships has been criticized.