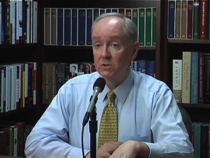 State legislators are dealing with a variety of issues, including several that Carolina Journal reported on recently. Managing Editor Rick Henderson explains what concerns legislators about federal and state rules governing kids’ home-made lunches, which became a national issue when a Hoke County four-year-old was told mom’s turkey sandwich didn’t meet guidelines. Henderson also updates the story about the censoring of a diabetes blogger by state nutrition regulators. Then, we turn to the ongoing debate about taking politics about of redrawing election maps. Voters are choosing members of Congress and the N.C. General Assembly this year based on new election maps crafted by the Republicans who control the legislature. Meanwhile, some advocates are pushing for reform of the redistricting process that creates the maps. You’ll hear comments from former state Republican Party chairman Bill Cobey, UNC-Chapel Hill law professor Gene Nichol, and others who support new redistricting rules. Next is a look at efforts to improve government efficiency. Some state lawmakers are pushing for new measures to do just that. Sen. Ralph Hise, R-Mitchell, discusses proposals involving zero-based budgeting, data analytics, and a taxpayer accountability act. That’s followed by a look at new global warming reports, which almost invariably suggest that conditions are worse than scientists had expected. Patrick Michaels, senior fellow in environmental studies at the Cato Institute, says a “government-scientific complex” helps explain why climate research tends to predict gloom-and-doom scenarios. And finally, grassroots activists are cheering reforms passed by the state legislature to North Carolina’s forced annexation laws, which have been some of the most liberal in the country. John Locke Foundation Vice President for Outreach Becki Gray explains the changes which give those being against their will a voice in the decision. She also updates the status of a handful of forced annexations already in the works.