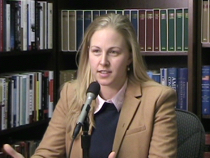 During each legislative session, education is at the forefront of budget and policy discussions. Expenditures on elementary, secondary, and higher education make up 58 percent of the state’s General Fund budget. With so much at stake, it would be wise for lawmakers to split up the existing committees and allow legislators to focus more intently on particular segments of education, according to Sarah Curry, director of fiscal policy studies for the John Locke Foundation. She explains the benefits of taking that step. Then we turn to economics. North Carolina finally returned last fall to employment levels last seen before the onset of the Great Recession. But as the state’s economy continues to improve, the state still faces major employment challenges. N.C. State University economist Michael Walden outlines key obstacles to continued employment growth in the state.  Next is a look at an often overlooked function of state government: courts. New N.C. Supreme Court Chief Justice Mark Martin wants the state’s leaders to take a closer look at North Carolina’s system. During a recent presentation to the newly revived N.C. Courts Commission, Martin announced plans for a new study commission he plans to form in the spring. It will inform leaders of the state’s business community about the importance of the judicial branch of government.That’s followed by a refutation of leftist conventional wisdom. Left-wing pundits and politicians have spent much time recently bemoaning the negative impact of income inequality. But James Piereson, president of the William E. Simon Foundation and senior fellow at the Manhattan Institute, says the focus on inequality diverts attention from a much more important problem: slow economic growth. And finally, Lindalyn Kakadelis, director of education outreach for the John Locke Foundation, talks about the upcoming National School Choice Week and the January 28 breakfast JLF will host to honor and support choice advocates from across the state. She also discusses the progress North Carolina has made over the past few years in terms of public charters, magnets, home schools, and vouchers.