Many Valid Reasons Not To Expand N.C. Medicaid 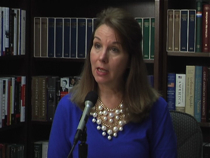 Last month Gov. Pat McCrory refused to call a special session of the General Assembly to expand Medicaid. Critics say it was the wrong decision. Not so, according to John Locke Foundation Vice President for Outreach Becki Gray, who details problems with Medicaid, including serious cost overruns and mediocre health outcomes. Then we turn to comments from Gov. Pat McCrory, who has been looking for ways to strengthen the relationship between the state’s business community and the public education system. He outlined some ideas on the subject during a presentation to the N.C. Business Committee for Education. You’ll hear highlights from McCrory’s remarks, plus a critique from Terry Stoops, John Locke Foundation director of research and education studies. Next is a further look at the state’s Medicaid system and the governor’s Medicaid reform proposal, which would allow managed care companies to compete for the right to serve the state’s Medicaid patients. Cathy Rossberg, vice president of the managed care company Amerigroup, recently explained for the John Locke Foundation’s Shaftesbury Society how managed care might change Medicaid in North Carolina. That’s followed by a look at a serious free speech issue. A group that monitors free-speech rights on college campuses is praising the North Carolina General Assembly for one step taken during the 2013 legislative session. Robert Shibley, senior vice president at the Foundation for Individual Rights in Education, explains why FIRE supports a measure that guarantees students can have legal representation when they face a court-like proceeding on a North Carolina university campus. And finally, we look at energy subsidies with John Locke Foundation Vice President for Research Roy Cordato. He explains that a discussion of subsidies for both traditional sources such as oil and coal, as well as those for renewable such as wind and solar, must include the subsidies and the penalties. Factoring in the penalties is key, Cordato says, if we hope to offer a legitimate look at who is receiving what from taxpayers.