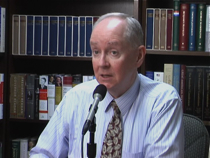 Gov. Pat McCrory is taking applause and criticism for his decisions related to the Affordable Care Act – ObamaCare. The governor has announced the state will not operate a health exchange and the state will not expand Medicaid. Carolina Journal Managing Editor Rick Henderson explains the choices McCrory faced and the implications for North Carolina. So what is ahead for the McCrory administration? Working with a GOP-controlled General Assembly, the new governor has a chance to make some major substantive reforms in North Carolina government. That’s the assessment of Americans for Prosperity President Tim Phillips, who recently shared that message in a briefing for North Carolina AFP activists in Raleigh. You’ll hear highlights from his presentation. Next is a look at the latest dust-up over gun rights. While the recent Connecticut school shooting has prompted some public officials to step up calls for gun control, others are taking the opposite approach. During a recent rally outside the state Legislative Building, Rep. Larry Pittman, R-Cabarrus, discussed his proposal for a state constitutional amendment to strengthen North Carolinians’ gun rights. That’s followed by a look at the political crystal ball. The 2012 election has prompted many conservatives and Republicans to question the party’s future. N.C. State political science professor Andrew Taylor offers his ideas to help the GOP compete more successfully in the next round of national elections. And finally, we look at potential changes to the requirements to become an attorney, an issue that George Leef of the Pope Center for Higher Education Policy has been analyzing for years. Leef explains how the current requirements inhibit people from entering the profession and why he advocates for changes.