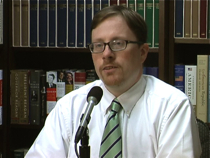 The latest school testing results are out and the four-year high school graduation rate is up to 80.2 percent. But, there was also a decrease in the percentage of students that met or exceeded growth expectation. John Locke Foundation Director of Education Studies Terry Stoops drills down into the results and explains why this is the last year the ABC system will be used and what will replace it. Then we turn to one scholar’s idea to root out cronyism. 4If you’re a fan of smaller government, a simplified tax code, and efficient markets, Harvard law professor Lawrence Lessig hopes you’ll support his plan for reforming the way members of Congress are elected. Lessig is not a conservative or libertarian, but he believes these goals would be served better by changing a system that he says is infected now by “raging cronyism.” Next is a debate over the proper role of government. Many conservatives look to an increased reliance on federalism as a key for restoring the proper role. Christopher Wolfe of the Thomas International Center disagrees. He recently explained why during a presentation for college students in Raleigh. That’s followed by a look at presidential politics and North Carolina’s important role in the fall election. Two former governors recently stumped in North Carolina to rally conservatives for the 2012 election. Former New Mexico Gov. Gary Johnson is seeking the White House as a Libertarian candidate, while former Minnesota Gov. Tim Pawlenty is rallying Republicans to support Mitt Romney. You’ll hear highlights from Johnson and Pawlenty’s presentations. And finally, we analyze several of the votes by the General Assembly to override vetoes issued by Gov. Beverly Perdue. John Locke Foundation Vice President for Outreach Becki Gray talks about the overrides of two budget vetoes and a regulatory reform veto.