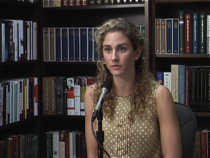 North Carolina is one of the states that has chosen not to expand Medicaid under Obamacare. Supporters of the Affordable Care Act say the move will cost the state billions, but John Locke Foundation Health and Human Services Analyst Katherine Restrepo says the decision is correct for a number of reasons. She explains why and offers recommendations that could improve outcomes for the poor and vulnerable. Then we turn to energy policy. The N.C. Mining and Energy Commission has been taking public comment in recent weeks on proposed rules governing hydraulic fracturing — fracking — for shale gas in North Carolina. Anti-fracking opponents have dominated the discussions, but those touting the potential benefits of fracking have shared their thoughts as well. You’ll hear highlights from one recent hearing. Next is an update on a key political race. The U.S. Senate race between incumbent North Carolina Democrat Kay Hagan and Republican challenger Thom Tillis has attracted national attention. You’ll hear an excerpt from their first publicly televised debate. It features their contrasting views about the federal Affordable Care Act. That’s followed by a look at the school choice movement in North Carolina. The late economist Milton Friedman devoted much of his life to expanding options for school choice. On Friedman’s birthday this year, N.C. House Speaker Pro Tem Paul Stam, R-Wake, discussed North Carolina’s latest school choice ventures with a John Locke Foundation audience. Stam explains how charter schools, vouchers, and other alternatives to traditional public schools can lead to better outcomes for all students. And finally, Jane Shaw, president of the Pope Center for Higher Education Policy, discusses efforts by some colleges to reach out to dropouts and help them graduate. The effort comes in the wake of dismal national college graduation rates. She also offers perspective on the debate over the value of a college degree.