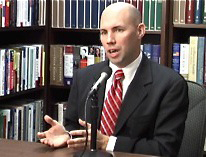 North Carolina’s unemployment rate hit 11 percent in October, even though some reports say the economy is recovering. Should we be encouraged? John Locke Foundation fiscal policy analyst Joe Coletti discusses why programs like Cash for Clunkers and the Homebuyer Tax Credit are putting a positive spin on economic activity when, in most cases, the programs simply move purchases forward rather than create new activity in the marketplace. Future sales numbers, he says, will reflect the lower sales, as the car industry has already demonstrated. Coletti also discusses the role lawmakers and Gov. Perdue play in the state’s economic recovery effort. He outlines misguided polices that should be changed. Then we turn to tax reform. As North Carolina lawmakers move forward with discussion about tax reform, they might find some good ideas from a surprising source: California. N.C. State University economist Michael Walden says the Sunshine state has produced some ideas that could help North Carolina tweak its tax system to work more effectively in the future. He outlines those ideas and explains why they might work economically and politically. Next, the environment takes center stage. Is the free market a friend or foe of the environment? That question framed a recent debate at the Campbell University Law School between Bill Holman of Duke University’s Nicholas Institute for Environmental Policy Solutions and Fred Smith of the Competitive Enterprise Institute. You’ll hear highlights from their debate. That’s followed by a look at home schooling. About 160,000 North Carolina students learn in private or home settings. Hal Young of the group North Carolinians for Home Education calls the state’s law for nonpublic education options “unique.” You’ll learn why. And finally, Carolina Journal Radio co-hosts Mitch Kokai and Donna Martinez discuss some of the recent postings made in JLF’s online blog, The Locker Room. Topics include fake jobs reported on the federal recovery.gov Web site, including several hundred that were falsely attributed to fake N.C. congressional districts as part of the Obama administration’s effort to justify stimulus spending and the effort to “save or create” jobs.