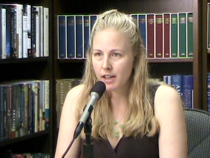 The debate over giving special tax breaks to some businesses and not others is typically focused on taxpayer money provided by the state of North Carolina. But Sarah Curry, director of fiscal policy studies for the John Locke Foundation, reports that most of the state’s counties have engaged in local tax incentives over the past five years. She provides details of her latest report. Then we turn to the judicial system. U.S. Supreme Court commentators often focus on the divide between conservative and liberal voting blocs. But Damon Root, senior editor at Reason magazine, says the more consequential split involves those who support judicial activism and judicial restraint. Root shares thoughts on those topics, based on research for his book “Overruled: The Long War for Control of the U.S. Supreme Court.” Next are comments on public policy from a very well known North Carolinian. Amid debates about the state budget, Medicaid reform, and taxes, state legislators heard some recent advice from Hall of Fame basketball coach Mike Krzyzewski of Duke University. During an address to the joint House and Senate, the man known internationally as Coach K urged legislators to focus their attention on education. That’s followed by a look at an effort to give homebuilders a break. Some lawmakers believe homebuilders should be freed from paying property taxes on unsold houses. You’ll hear highlights from debate of a bill designed to give professional homebuilders a tax break for houses that remain unsold for up to three years. And finally, as the state budget negotiations drag on in Raleigh, a key provision endorsed by the John Locke Foundation is one that pertains to providing more transparency to taxpayers for the money taken from them in taxes and spent on government programs and services. John Locke Foundation Vice President for Research Becki Gray explains the provision, how it would help taxpayers, and efforts to ensure it makes it into the final approved state budget.