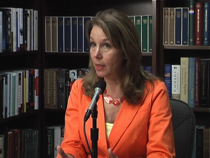 It is called the Energy Modernization Act of 2014, a law designed to clear the way for on-shore energy exploration in our state through hydraulic fracturing. John Locke Foundation Vice President for Outreach, Becki Gray, explains the process of fracking, where the deposits are in North Carolina, the jobs that are likely to come with exploration, and how the environment will be protected. Then we turn to education policy. State lawmakers who want North Carolina to drop Common Core public school standards want to ensure that the state has better standards to adopt in Common Core’s place. You’ll hear highlights from a recent legislative debate on the topic, along with reaction from John Locke Foundation Director of Research and Education Studies Terry Stoops. State legislators have also been urged to devote money toward protecting North Carolina’s electrical grid from an electromagnetic pulse, or EMP. But a recent discussion of the topic highlighted some lawmakers’ concerns about quantifying the risk of a devastating EMP in North Carolina. That’s followed by a look at health care delivery systems. Advocates of a large government role in American health care often point to Great Britain’s National Health Service as a model. Duke professor John Staddon, a British native, discusses some of the pros and cons of the NHS model and its potential application in the United States. And finally, John Locke Foundation Vice President for Research, Roy Cordato, analyzes the recent move by state lawmakers to add a tax to e-cigarettes, a relatively new form of tobacco delivery system. Cordato explains that adding the tax is in conflict with legislators’ move last year to reform the tax system.