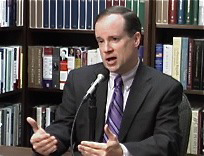 North Carolinians go to the polls Tuesday to elect mayors and city council members. Predictions are for low turnout, particularly when compared with a presidential election year. Nonetheless, the races on the ballot are important when you consider that local officials control everything from property tax rates to the number of trees allowed on one’s property. John Locke Foundation president John Hood previews the election and discusses turnout, the debate over partisan vs. nonpartisan elections, and the race to replace Charlotte mayor Pat McCrory. Then we turn our attention to national politics. The first year of the Obama administration has provided plenty of ammunition for conservative critics. Many of them shared their concerns with the 400 North Carolinians who joined a crowd of 2,000 people at the recent Americans for Prosperity summit in Washington, D.C. You’ll hear excerpts from comments by former U.S. House Speaker Newt Gingrich, Republican U.S. Sen. Jim DeMint of South Carolina, talk radio hosts Herman Cain and Hugh Hewitt, and HotAir.com blogger Ed Morrissey. While Fox News analyst and syndicated columnist Cal Thomas has plenty of concerns about the Obama administration, he devoted most of a recent John Locke Foundation Headliner speech to the topic of radical Islam. Thomas explains why that threat is greater than any of the bad ideas circulating in Washington, D.C. That’s followed by a look at the president’s view of a key K-12 education issue. Though President Obama entered the White House as an apparent supporter of school choice, his administration took early steps to hurt a school choice program that helps students in the nation’s capital. That prompted a protest from school choice advocates such as Darrell Allison, president of Parents for Educational Freedom in North Carolina. Allison describes the protest and offers an update on school choice initiatives in this state. And finally, Locke Foundation education policy analyst Terry Stoops discusses the sweeping change that’s likely to come to the Wake County school board, and what the change could mean to other North Carolina school systems. On October 6, Wake voters elected a slate of candidates that oppose the board’s current policy of busing kids out of their neighborhoods to ‘balance’ the economic diversity of schools. Grassroots opposition to the policy has been growing for several years and it now appears the policy will be overturned when the new board takes office. What can other boards and systems learn from the vote? Stoops weighs in on parental concern over student achievement and how best to address the needs of all kids.