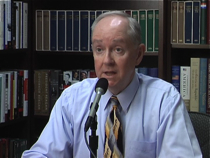 The implementation of the federal Affordable Care Act (ObamaCare) is looming. On October 1, the health insurance exchanges will open, and as of January 1, 2014, individuals will be required to purchase a government-approved insurance policy or face a government fine. So what will ObamaCare coverage cost each of us? Carolina Journal Managing Editor Rick Henderson explains what rates could be coming based on information released by Blue Cross Blue Shield, as well as the Manhattan Institute. Then we turn to environmental policy. Protecting North Carolina’s environment does not mean setting up major roadblocks to economic growth. That’s a key message John Skvarla is trying to send as the new secretary of the N.C. Department of Environment and Natural Resources. Skvarla discussed the balance of environmental and economic goals during a recent public presentation for the John Locke Foundation. Next is a look at politics. North Carolina lawmakers recently voted to override Gov. Pat McCrory’s first two vetoes. One veto targeted a measure that could make it easier for the state’s employers to hire illegal immigrants on a seasonal basis. You’ll hear Republican arguments for and against the bill from the N.C. House’s veto debate. That’s followed by next year’s race for the U.S. Senate seat now held by Democrat Kay Hagan. N.C. State University political scientist Andrew Taylor discusses key factors influencing that election and offers some hints about the way Democrats and Republicans might campaign to win the coveted Senate seat. And finally, John Locke Foundation Director of Research and Education Studies Terry Stoops discusses the latest homeschooling data, which shows more and more parents are opting to educate their children themselves. Stoops also discusses why homeschooling appeals to parents across the political and social spectrum.