Obamacare Ruling: What It Means To North Carolina 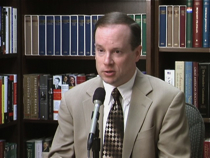 Now that the U.S. Supreme Court has upheld the Affordable Care Act – Obamacare – analysts are wondering what the ruling means for freedom, government power, and states such as North Carolina. John Locke Foundation President John Hood analyzes the ruling, its implications for freedom and the power of government, and discusses potential next steps for North Carolina lawmakers. Then we turn to the short legislative session, which adjourned ahead of the July 4th holiday. For the second year in a row, Gov. Beverly Perdue vetoed the General Assembly’s General Fund budget bill. For the second straight year, state lawmakers voted to override the veto. You’ll hear highlights from the veto override debate in the state House, where majority Republicans needed help from a handful of Democrats to set Perdue’s veto aside. State legislators also overrode Perdue’s veto of a bill to revise North Carolina’s Racial Justice Act, a law designed to help death row inmates use statistical arguments to help commute their sentences to life in prison. You’ll hear defenders of the original act, along with those who supported the changes that became law despite the governor’s objections. Then we turn to regulatory reform. A year after passing sweeping reforms for state government, the Republican-led General Assembly endorsed another reform bill this year. You’ll learn why. And finally, we delve into more actions of the General Assembly with Becki Gray, vice president for outreach for the John Locke Foundation. She analyzes the issues that were addressed and the momentum for more fiscally austere budget plans that respect taxpayers.