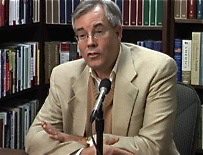 What if you could get a quality college education for around $1,200 per year? Would you go for the low price or be wary of what you were getting into with an online program? George Leef of the Pope Center for Higher Education Policy discusses the growth of online education opportunities and the threat the option represents for traditional bricks and mortar universities. Then we turn to politics. Michael Barone senses a major change in voter enthusiasm over the past year. The longtime political pundit for Fox News and The Washington Examiner explained during a recent John Locke Foundation Headliner event in Raleigh how that change in enthusiasm could impact election results in 2009 and 2010. Barone also discussed election trends in a one-on-one interview with Carolina Journal Radio. Many believe the state of the economy will have a big impact on who gets elected, and who doesn’t, next time around. Advocates for the federal stimulus plan claimed it would create jobs. But Donna Arduin of Arduin, Laffer & Moore Econometrics points to an analysis that shows how the stimulus plan will actually cost jobs. Arduin, a former budget adviser to governors in four states, told the Civitas Conservative Leadership Conference that the stimulus package could cost North Carolina 67,000 jobs. You’ll hear details from that presentation. That’s followed by a look at Gov. Beverly Perdue’s first veto, which she handed down this year when she rejected a bill approved during the closing days of the 2009 legislative session. It would have added confidentiality requirements to documents and records linked to the legislative process. You’ll hear Perdue’s explanation for her veto, along with analysis from John Locke Foundation Vice President for Outreach Becki Gray. And finally, North Carolina’s ban on video poker is being challenged in the state’s Court of Appeals. Carolina Journal Radio co-hosts Mitch Kokai and Donna Martinez discuss the disconnect between the video poker ban and the state’s endorsement and operation of gambling via a state lottery.