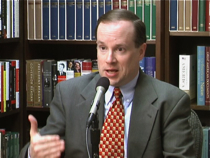 It was high drama in the U.S. Supreme Court as the justice heard from, and occasionally sparred with, attorneys for and against the constitutionality of Obamacare. John Locke Foundation President John Hood talks about the arguments and the debate over the individual mandate. Then we turn to a look at foreign affairs. Current turmoil in the Middle East will have important implications for U.S. interests. Harvard professor and former Bush administration Middle East expert Meghan O’Sullivan delivered that message during the annual Pope Lecture at N.C. State University. O’Sullivan followed that speech with a one-on-one interview with Carolina Journal Radio. Next is a look at a critical problem facing North Carolina. While North Carolina policymakers try to figure out how they’ll repay $2.8 billion borrowed from the federal government for unemployment insurance benefits, some lawmakers want to ensure North Carolina loses as little money as possible to unemployment fraud. House Speaker Thom Tillis, R-Mecklenburg, and Reps. Marilyn Avila, R-Wake, and G.L. Pridgen, R-Robeson, discuss a new task force focusing on rooting out fraud within the unemployment system. That’s followed by a look at federal power. The targeted killing of al-Qaeda operative and U.S. citizen Anwar al-Awlaki in Yemen last year raises some red flags for civil libertarians. Doug Bandow, senior fellow at the Cato Institute, outlines safeguards that could help ensure the federal government is not abusing its power if it places a U.S. citizen on a terrorist death list. And finally, John Locke Foundation Director of Regulatory Studies Jon Sanders discusses the debate over tapping domestic energy resources and why there seems to be a coalition of people who thwart efforts to access them.