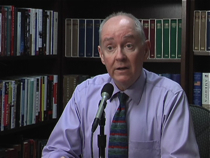 A political shocker. That’s the way some are describing the results in one of North Carolina’s primary election runoff races. Carolina Journal Managing Editor delves into the trouncing of favorite Phil Berger Jr. by fellow Republican Mark Walker in the 6th District congressional race – a race Berger won in the May primary. He also discusses the debate over debates between U.S. Senate candidates Kay Hagan and Thom Tillis. Then we turn to efficiency in state government. As Gov. Pat McCrory’s administration continues to move forward with the NC GEAR efficiency project, some state lawmakers have concerns. Legislators grilled NC GEAR’s Joe Coletti during a recent public meeting. You’ll hear highlights from their discussion. Next is a look at an issue that’s been brewing for years. State lawmakers changed state law this year to allow military families to pursue lawsuits connected to water contamination at Camp Lejeune. Career Marine Jerry Ensminger, co-founder of a group called The Few, The Proud, The Forgotten, recently explained why the General Assembly’s actions were so important for affected families. That’s followed by a look at health care news. Most elements of the Affordable Care Act focus on increasing access to health insurance. The act does not address the question: How risky is it for a person to have no health insurance coverage? Dr. Chris Conover, research scholar at Duke University’s Center for Health Policy and Inequalities Research, tackled that topic during a recent presentation for the John Locke Foundation.  And finally, we delve into the ongoing controversy over college athletics and whether or not student athletes are treated fairly. Jenna Ashley Robinson of the Pope Center for Higher Education Policy discusses the trends in college athletics and the constant friction between academics and athletics, which is a huge moneymaker universities.