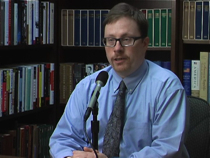 Education is always high on the list of concerns for parents and taxpayers, but this year’s midterm election has catapulted the issue of state spending onto the national stage. John Locke Foundation Director of Research and Education Studies, Terry Stoops, explains why the message being spun by progressives is wrong. Stoops refutes the claim that state legislators, led by House Speaker Thom Tillis, cut education spending by $500 million. He also clears the air about how much money is being spent per-pupil. Then we continue with election politics, but turn our attention to races for seats on the North Carolina Supreme Court. North Carolina voters will fill four of the seven seats on North Carolina’s state Supreme Court this fall. Carolina Journal Radio co-host Donna Martinez recently moderated a Federalist Society forum featuring candidates in each of the contested Supreme Court races. You’ll hear highlights from each candidate who attended that forum. Then we turn our attention to a brewing legal debate. North Carolina faces an ongoing legal fight over access to information about state unemployment appeals. State lawmakers recently heard an update on the latest developments in the case, which pits the federal government’s privacy rules against state public-records claims. That’s followed by a look at smoking bans, most of which are linked to concerns about public health. But Duke University professor emeritus John Staddon offers the contrary argument in his book Unlucky Strike that smoking restrictions rely on misinformation, have little impact on public health, and demonstrate unreasonable hostility toward smokers.  And finally, we look at three key races for seats in the U.S. Congress. North Carolina elects 13 members of Congress every two years, but this time around, Republicans are likely to pick up the 7th District seat held for years by Democrat Mike McIntyre. Carolina Journal Managing Editor Rick Henderson explains that McIntyre’s retirement is ushering in what looks to be a likely win for Republican David Rouzer. He also discusses Clay Aiken’s celebrity and its impact on the Democrat’s run against 2nd District Republican incumbent Renee Ellmers. He also discusses the dynamics of the 6th District race, where Democrat Laura Fjeld is running an aggressive race against Republican Mark Walker for the seat currently held by Howard Coble, who is retiring.