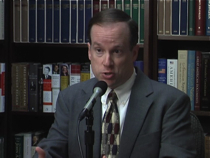 Exactly what will it take to make North Carolina more prosperous with a growing economy and plentiful job opportunities? John Locke Foundation President John Hood explains the results of his analysis of more than 500 scholarly research papers on the subject, which conclude that economic freedom is the key and the Left’s policy prescriptions are seriously flawed. Then we turn to education. American public school students test poorly in math when compared to their peers in other developed countries. Jacob Vigdor, professor of public policy and economics at Duke University, analyzes the problem and explains the role of two conflicting goals in American education. Next is a look at health insurance and health care. Part of the promise of the federal Affordable Care Act, or Obamacare, is that government subsidies will help people deal with the rising costs of health insurance premiums. But Republican U.S. Rep. Renee Ellmers of North Carolina’s 2nd District has been pushing a piece of legislation on Capitol Hill designed to close a major loophole in the subsidies. Ellmers explains details of that bill. That’s followed by comments from Grady Jefferys, who was a player in North Carolina media and politics for more than four decades. He describes some of the most interesting stories from his fascinating career in the book I Never Promised Not to Tell. Jefferys shares anecdotes from his book. And finally, we look at rising costs for a college education with George Leef of the Pope Center for Higher Education Policy. Leef responds to a recent book that proposes “free” college education for all by listing all the reasons this proposal is folly and would simply create another K-12 education system that fails to meet the needs of individual men and women.