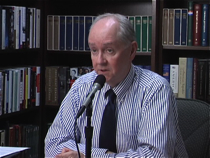 Supporters of special North Carolina tax breaks for film and television productions defend the special break by saying it creates jobs and leads to greater economic impact. But research from the General Assembly’s fiscal research staff shows otherwise. Carolina Journal Managing Editor Rick Henderson explains why. Then we turn to accountability and efficiency in government. State Auditor Beth Wood’s office has not been shy about pointing areas in which state government agencies have fallen short of acceptable accounting standards. Wood discusses her auditing priorities and explains why some areas of state government need major improvements. Next is a look at the debate over health and health insurance. Medicaid expansion is one of the key pieces of the Obama administration’s health care reform plan. But Duke University research scholar Chris Conover recently warned North Carolina lawmakers that Medicaid expansion creates too many problems. You’ll hear highlights from his remarks. That’s followed by a look at education policy. Another Duke expert, public policy and economics Professor Jacob Vigdor, outlined for a legislative panel an alternative to North Carolina’s current public school teacher salary schedule. Vigdor’s “evidence-based” model would build larger raises into the earliest years of a teacher’s career, then flatten out pay increases for later years of teaching. And finally, we turn to an incident on a college campus that has made national news. George Leef, research director for the Pope Center for Higher Educatioin Policy, discusses the furor over Bradeis University dis-inviting a speaker because some students complained they were offended by her comments and work to shine light on radical Islam’s treatment of women,which she says she personally experienced. Leef explains that it is just one more example of a disturbing trend that moves college campuses further and further away from their mission of being marketplaces of ideas, where young people are exposed to many ideas.