Should N.C. Compensate Victims of its Eugenics Program? 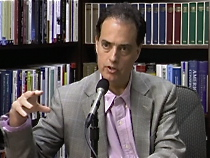 One of the most troubling episodes in North Carolina history relates to the state’s eugenics program – the program that oversaw the forced sterilization of around 7,000 citizens. John Locke Foundation Director of Legal and Regulatory Studies Daren Bakst provides background on the program, its goals, and the current interest of state leaders in providing compensation to the victims. To that end, a governor’s task force recently heard testimony from victims of the forced sterilization program. You’ll hear from Elaine Riddick, who was sterilized at age 14. You’ll also hear from Melissa Hyatt and Australia Clay, the children of two other eugenics victims. Next we turn to the proper role and conduct of oversight boards. When the General Assembly is out of session, state lawmakers assign much of their legislative power to year-round oversight boards. Sens. Tom Apodaca, R-Henderson, and Martin Nesbitt, D-Buncombe, recently debated the proper role of the majority and minority parties on those oversight groups. You’ll hear highlights from that discussion. That’s followed by a discussion of the economics term “market failure,” which focuses on the rare cases in which free markets produce results that aren’t in society’s best interests. But Duke University professor John Staddon uses the term in a different way. Staddon, a professor of psychology, biology, and neurobiology, believes financial markets are designed to fail. He explains why. And finally, we often hear the claim that a college degree is worth $1 million more in earnings over a lifetime than a high school diploma. But is it really? Jenna Ashley Robinson of the Pope Center for Higher Education Policy looks at the research on that subject and details the conclusion: that the value of a college degree is much less than $1 million. She also offers advice on how to best evaluate a college or university based on a particular student’s needs, wants, likes, and dislikes, should a student decide to pursue a traditional degree.