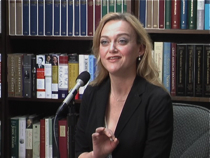 Nearly a year after the U.S. Supreme Court struck down an Arizona campaign-finance law that allowed some Arizona candidates to receive “rescue funds” provided by taxpayers, North Carolina lawmakers are looking at bringing state law into compliance. Jeanette Doran, executive director of the North Carolina Institute for Constitutional Law, explains the ruling and how and why it impacts N.C. law. Then we turn to state budget issues. As North Carolina lawmakers put the finishing touches on their budget plan, state senators invited the public to offer an assessment of their ideas. You’ll hear highlights from a public hearing on the budget, including praise from limited-government advocates and criticism from supporters of spending increases for education and public health programs. That’s followed by comments from state lawmakers during debate about providing $50,000 payments to living victims of North Carolina’s 20th-century eugenics-based forced sterilization program. A House debate on the topic featured bipartisan support for the measure, along with those who criticized the potential fiscal impact. Next is look at juvenile justice policy. North Carolina is one of just two states that send all 16-year-old offenders to the adult criminal justice system. A conservative group called Right On Crime is helping lead the push to shift most of those offenders to the juvenile justice system. Marc Levin of Right On Crime and the Texas Public Policy Foundation’s Center for Effective Justice explains why the shift makes fiscal sense.  And finally, we’ve heard about the federal Pell grant program, but how prevalent is it and are taxpayers getting a good bang for the buck? Jenna Ashley Robinson of the Pope Center for Higher Education Policy discusses results of a Pope Center study that shows the program has expanded eligibility well into the middle class and, thus, it continues to grow in size and cost. Robinson details recommendations to bring the program back in line with its original purpose of helping low-income students and to provide more accountability to taxpayers.