Supreme Court Rules, So What’s Next For Obamacare? 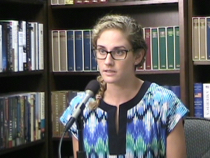 A major U.S. Supreme Court ruling is drawing cheers fro those who support the Affordable Care Act, but jeers from those who believe health insurance and health care should be driven by consumers, not government. Katherine Restrepo, the John Locke Foundation’s health and human services analyst, explains what the ruling means, how North Carolinians are or aren’t impacted, and what could come next for reformers who seek to roll back government involvement in the insurance market. Next is a look at an effort by state lawmakers to make it easier to collect evidence that proves whether government programs are working. You’ll hear highlights from a recent debate about a bill to create independent “measurability assessments.” Those assessments would help legislators put government programs under the microscope. Then we turn to the continuing debate over gun rights and gun laws. Efforts to tweak North Carolina’s gun laws have generated much debate this year. One gun-rights group, Grassroots North Carolina, argues that former New York Mayor Michael Bloomberg is spending big money to fight Second Amendment rights in this state. The Grassroots group responded with its own radio advertising campaign featuring North Carolina mothers who oppose Bloomberg’s efforts. That’s followed by a look at higher education. Amid bad news about academic scandals, free-speech restrictions, and grade inflation, the higher education community is producing at least some positive developments. Jay Schalin, director of policy analysis for the John W. Pope Center for Higher Education Policy, discusses the emergence in recent years of independent academic centers. Those centers have helped provide some balance for left-leaning elements on university campuses. And finally, we get an update on North Carolina’s push for redistricting reform, in light of a recent U.S. Supreme Court decision about an Arizona redistricting law. Carolina Journal Managing Editor Rick Henderson dissects the case and how it may spur another run at reforming the process for drawing the state’s election districts.