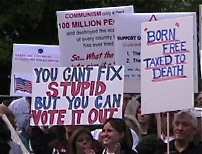 Thousands of tax protesters gathered April 15 at sites across North Carolina for a series of ‘tea parties.’ They were designed to showcase concerns about rising tax obligations, federal bailouts, increasing national debt, and uncontrolled government growth. You’ll hear highlights from tea parties in Fayetteville and Raleigh. Then John Locke Foundation Vice President for Outreach Becki Gray, a speaker at several ‘tea parties’, shares her experiences in talking with activists and hearing their concerns. Gray says the group consisted of many who had never before attended an event related to policy and politics. She also discusses ideas for harnessing the energy and momentum of the fiscally conservative group, including membership in the Locke Foundation’s Freedom Clubs. The second round of Freedom Club meetings begins in late May and continues through June at seven locations across the state. Information is available at 1-800-JLF-INFO. Next, we turn a taxes. The only certain things in this world are death and taxes, as Benjamin Franklin said, but at least one lawmaker believes state government should not combine the two. Sen. Eddie Goodall, R-Union, explains why he believes North Carolina should repeal its estate tax, also known as the ‘death tax.’ That’s followed by a look at transportation issues. North Carolina transportation officials say they’ll need billions of dollars in the years ahead to meet the state’s transportation needs. If taxpayers are going to devote more money to transportation, David Hartgen says that money should head to projects that actually fix problems such as increasing traffic congestion. Hartgen, emeritus professor of transportation studies at UNC-Charlotte, discusses the state’s transportation challenges. And finally, Carolina Journal Associate Editor David Bass discusses fraud in the state’s free- and reduced-lunch programs. The federally administered program is getting more attention now that the economic downturn has led to more families accessing the program’s benefits and supporters are calling for more government funding.